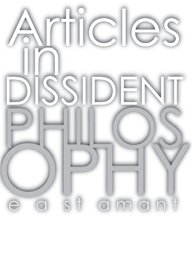 Reason sheds a light in dark places, revealing a truth where before was ignorance and the void. Art often gate-crashes the party, drinking blindly from the cup, sending a shaft of light into the shadows. Necessity is the mother to the kingdom of consciousness, that which first gave birth to philosophy. Art, the brain-child of reason, creates myth. Science, the heir apparent to reason, reveals the form. Religion, the old wet-nurse to reason, tries in vain to set the moral standards. Three centuries ago, it was a lighthouse guiding the ship out of the port. It was a brave voice in the back of our whispering collective consciousness saying when to put a sheet in the wind's eye and when to abstain from animation. It was the wasp at a party who preyed upon the priests and looked to heaven for naught. In the age of enlightenment, it was overlord and everything seemed possible. Now its time has returned!

"Does a job so thoroughly busting up the party of the irrational that it's like a beating-down of the gods of modern myth. No less than a complete overthrow of all aspects of Plato and Neo-Platonism."

“I was on holidays for a week and I read a few books. Three were nonfiction. The first was, 'The Selfish Gene' by Dawkins. Although the book has it's merits describing evolution, it is hard to take that there is an actual selfish gene; all life has an evolutionary trail of survival. The second was 'The Grand Design' by Hawkins. Extremely disappointing. Almost nothing new, and instead of trying to find the WHY and HOW of Quantum physics, he has settled for what it may do. In the end Hawkins claims that we should believe in Science instead of God. Believing in blind science is no different then blind god. The third book was 'Articles in Dissident Philosophy'. This was by far the best of the three. Most of the articles are about taking responsibility for yourself and control of your own life. This is very important to achieve a successful and full life. I have recommended my two teenage sons to read it...”