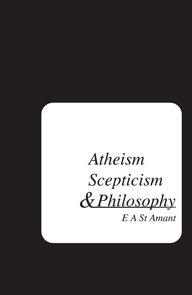 “A much needed and refreshing voice of reason. It is multi-dimensional and thorough at refuting the irrational, whether it be philosophies, ideologies, beliefs, religions, politics or what have you. A lot is tackled in these pages . . . a provoking work which also weighs in on morality, personal freedom and human rights . . . the author casts a wide net to find his opponents . . . a great read for sceptics, fence sitters and the free thinkers alike.”

“Atheism, Scepticism and Philosophy examines several points: that reality can be definitively grasped, that reason is the only worthwhile means of seeing it, that we can be creative, that we have real freedom of choice and that the right to liberty is guaranteed by our ability to do all this. The book is like having a voice of reason in your corner.”

“There could be a worldwide constitution. It's no mere contrivance. It's a global accord of property, democratic and human rights with China, Russia and India. The industrialised democracies will overtake the world's markets. The middle place we occupy is a necessary and even convenient belief for humans. Religion is always wishful thinking and philosophers are criminals of world disaster. These are just some of the ideas defended in Atheism Scepticism and Philosophy. Relative knowledge is the only asset, whereas absolute knowledge is a lethal poison. There is a morality we can all agree on. Reason reigns supreme and instinct, faith and intuition are an irredentist's delusion. Challenging.”

“I have studied philosophy as a minor during my undergraduate years and I did not know what to expect with Atheism Scepticism & Philosophy. I must admit to having been somewhat fearful that some sort of crank world view would be presented. I had long noticed that both libertarians and Marxists can sometimes slip into a sort of quasi-religious dogmatism. And too often ’radical’ thinkers slide too far to the left or to the right. St Amant’s book was not such a doctrinaire screed. In fact, on the whole I was impressed with his line of reasoning. E A St Amant’s main thesis seems to be that reason tends to be democratic, and irrationality tends to the converse. As a general empirical observation, it seems to me true that irrationalism and tyranny go hand in hand. St Amant seems to be quite a bit more anti-cleric than I am. There is something of a trace of Dawkin’s style in St Amant’s critique. But still, his religion slamming was the most enjoyable part of the whole book. If nothing else the critique of religion-in-general was hilarious. It was hilarious because true. Those aspects of religion that can be criticized in this manner indisputably deserve it. I may take some issue with some specifics of E A St Amant’s conclusions. For in general I am less offended by irrationalism, or rather have come to expect it. But it is okay to disagree. Disagreement is good thing. And may it ever be so. Reason is about dialogue. It is about keeping the arguments going whilst there are still questions unanswered. It is about not issuing fatwa on your opponent just because you are losing the argument. Those who would squelch dissent seldom, if ever, speak from reason. But let us not play their game. Keep all things reasonable. Just like St Amant, let us argue with humor and flexibility of spirit. I must in passing confess a fondness for Kant. I also have an antipathy towards Ayn Rand’s overstatements. My main problem with Rand was that she too often put the logical cart in front of the empirical horse. In my way of thinking, empirical observation should always be allowed to trump pure reason. Because reducing everything to tight-logic is Platonist at its most hokum. In other words, forcing facts to fit one’s metaphysics is irrational. Also I was delighted to find that at least someone else, besides me, has judged Ayn Rand harshly for her misunderstanding of Kant.”

“Amassed with information . . . I took a long time with it and I was glad I did. For a whole year it became my companion at university. It examines several points: that reality can be definitively grasped, that reason is the only worthwhile means of seeing it, that we can be creative, that we have real freedom of choice and that the right to liberty is guaranteed by our ability to do all this. The book is like having a voice of reason in your corner.”