Dancing in the Costa Rican Rain 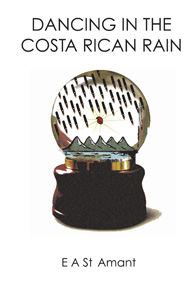 This work explodes the leftist myths about the defeat of the Sandinistas by the US Imperialists and topples one untruth after another. It is an intriguing hard-boiled political adventure reflecting the dedication of its protagonists to democracy, even while it focuses on atrocities and Human Rights abuses committed by both sides during the long conflict . . .

“E A St Amant captures a perfect pitch from his democratic centralist’s perch and tilts his pen at the crooked windmills of both left and right . . . engaging and unforgiving . . . it follows the story even up until present . . . informative . . . a political chronicle that is also a page-turner.”

“Rich with detail, exciting and intense. It plunges the reader into a struggle for survival under a political power clash where friendship, love, betrayal and revenge highlight and intensify the human story.”

“is a good adventure with strong political views, extremely informative of the history of Nicaragua. The characters are well depicted and I learned the political views of some of the surrounding Central American countries. Though the Central Americans are similar in their aspirations, they seem to change as soon as you cross a border. An enjoyable tale . . . not suited for those with narrow-minded political views . . . a suspenseful story while also incorporating intelligent humor.”

“So far I've read Stealing Flowers, Fog Walker and Book of Mirrors. I fully intend to read all of E A St Amant's books. This work was enlightening in regards to the politics of Central America and equally critical of both sides of the conflict in a original way that I have never before seen. It educated but wasn't highbrow; it entertained, had a common vernacular and was funny. I felt miserable for both the Conservatives and the Liberals; the Somoza family were terrible despots and the Sandinistas were fanatics . . . as the author says, 'Poor Nicaragua'.”

“E A St Amant successfully develops characters who are caught in the whirlwind of a historical event; the settings, descriptions and issues from the first pages infatuate you, pull you in to the swirl of the people and places, so that your mind is transformed into a sort of sponge effortlessly absorbing the gripping narrative. You’re going to enjoy the ride and be informed while you’re getting to where it sends you: the Sandinista revolution and the Contra reaction studied under a magnifying glass.”