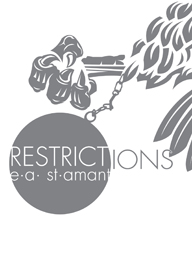 The love of one woman–Helen, the famous Judge Lemmeur’s beautiful daughter–by two identical twins, Bryce and Juno Pontoon, law-clerks from St Pauls, Minnesota, leads to calamity. E A St Amant has written a tale so dark and so lacking in civility that you will fear for its perpetrators and victims alike. A powerful story of thwarted intentions and twisted designs leads in short order to the culmination of murder, degradation and despair.

“At first it seems about lust, violence and deception of the worst kind, yet in there lies a perplexity, for it’s offset by witty and downright hilarious dialogue taking place between outrageous characters who will stay with you as long as a tattoo. Yes, it’s about tattoos, and as well, about the war in Iraq, obesity, excess in America, drugs, art theft, betrayal of the most unsavoury kind, all sorts of physical gratification and sex you’ll want to forget or maybe even remember.”